Revel provides a testing framework that makes it easy to write and run functional tests against an application.

The skeleton app comes with a simple apptest.go to use as a starting point.

Tests needs to be in the tests/ directory:

WARNING: The name of test file should avoid naming like name_test.go format which would be ignored by go build tool. Please check the Detail.

The example code above shows a few things:

You may run this test in two ways:

To create your own test suite, define a struct that embeds TestSuite, which provides a HTTP client and a number of helper methods for making requests to the application.

If the developer wishes to use a customized HTTP Client instead of the default http.DefaultClient, they should replace it in the Before() method.

All assertions raise a panic if they are not fulfilled. All panics are caught by the test harness and presented as errors.

In order to run any tests, the testrunner module must be activated. This is done by including the following line in your app.conf:

You must also import the test module’s routes, by adding this line to your routes file:

With that done, the tests may be run interactively at the /@tests url, or non-interactively on the command line.

For example, the developer loads /@tests in their browser:

Then they add a test method:

Then they refresh their browser to see their new test:

They run the test: 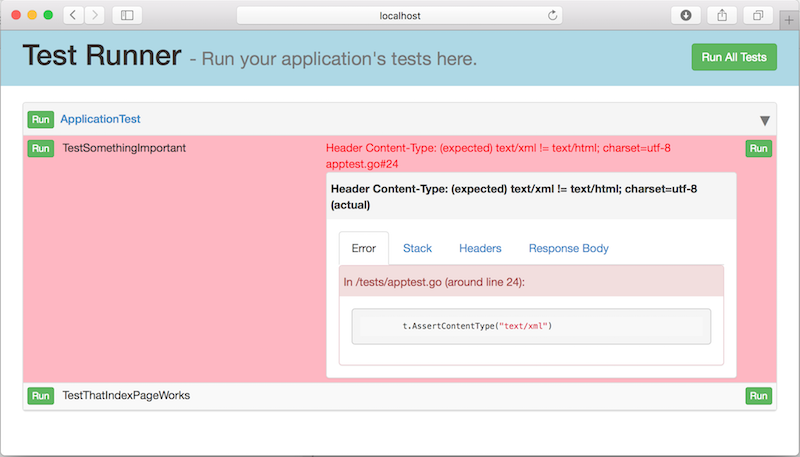 Uh oh. It doesn’t work. They fix the code to expect a content type of “text/html” instead of “text/xml”:

Then they re-run the test:

The Revel command line tool provides a test command that allows all application tests to be run from the command line.

Here is an example session:

You can also run a single test suite, or method within that suite, with a period-separated parameter:

In the console only a simple PASSED/FAILED overview by test suite is displayed. The tool writes more detailed results to the filesystem:

There are two suggested mechanisms for integrating this into a continuous build:

What Revel does is:

Testing code is only built when the special testrunner module is activated.

The testing framework could use the following improvements: